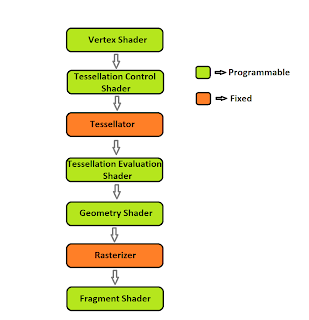 The flowchart above shows the basic OpenGL Rendering pipeline. In this project I have modified all the programmable stages shown in green above. The Tessellation shader consists of the Tessellation Control Shader which is called for every vertex coming out from the Vertex shader and they know what are the other vertices that make up the primitive. It is here that we assign the inner and outer tessellation levels for a triangle. The inner level determines how many concentric primitives will be created during tessellation of a single primitive; while the outer level determines how the concentric primitives will be attached to each other. The OpenGL Insights book - Chapter 6 explains this well. The OpenGL specifications for Tessellation shaders is also a good read. So once this is set, it is sent off to the Tessellator which does the actual tessellation by creating new vertices and primitives. The Tessellation Evaluation Shader (TES) is then called which I used to generate the actual coordinates of the vertices generated in world space. What comes out of the TES, in case of triangle primitives, are barycentric coordinates and in case of quads they are uv values. These can then be interpolated with the original primitive coordinates to get the final values.

This output from here is passed on to the Geometry Shader, where I calculate the normals for the primitives (details in previous blog post). Few images based on different tessellation levels are shown below. Right now I am doing a straight tessellation for all geometry present in the scene, which will be later changed to tessellation based on distance. 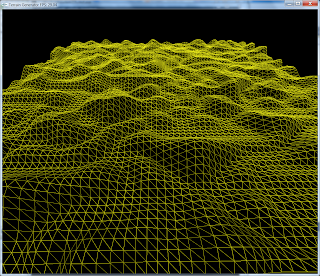 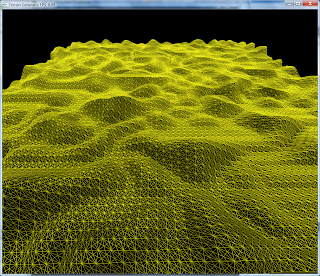 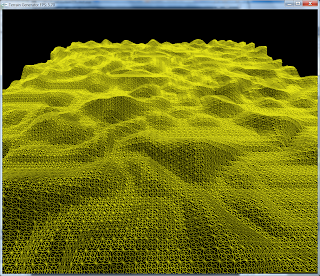 I haven't yet displaced the tessellated vertices and so they appear on the same plane as the original primitive. Due to this, shading is not affected by tessellation currently.

Helpful Links:
Posted by Tiju Thomas at 7:57 AM